The Romanians among the Roma

Home/The Romanians among the Roma
Previous Next

The Romanians among the Roma

How would you respond if in your town, in your settlement, or in your street came people from another country and they speak the language of their country and you can almost fully understand them! Probably you would be excited and thrilled because you could talk with these people in your mother tongue.

That’s exactly what happened last week. A group from Romania, three sisters and seven brothers, came to Croatia to proclaim the Gospel to Roma people door to door. The reason why many Roma from Croatia can understand the Romanian language is that their ancestors once lived in Romania.

The team from Romania spent ten days in Croatia. Our RCF team spent five full days with them. Our role was more of the host; we took care where will they sleep and what will they eat. But we also visited, together with this team, some Roma villages where we were before and we also discovered a few new ones.

We welcomed the Romanian team in the Sisak area. There we visited three different Roma villages. One of those villages was ‘Capraške poljane’ where we had the First Klema Carnival for kids earlier this summer. It was nice to see the kids! When the kids figured out that we were in the village, they joyfully ran towards us with open arms to hug us. In the whole short time that we spent with them, they were asking us where is the rest of the team that they met this summer and when we will they come again. We can’t wait to see these kids again.

On the way back to Slavonski Brod, we stopped at the Roma village in Kutina. Our RCF team talked to a few mothers and kids that were waiting for the school bus. Some of the kids were very shy and didn’t want to talk with us because they don’t know us. We are hoping that one day we will be able to do a Klema Carnival in this village and bless them.

On Saturday, the team from Romania spent all day in our village in Slavonski Brod. During the day they visited homes. And in the evening they had an outreach at the big field. A few new people came with whom we didn’t have any previous contact and they have shown interest that we visit them in the future and have a bible study with them. Because of this, our RCF team is delighted and encouraged.

On Sunday, after the morning service in the local church where the team from Romania served with song and a sermon, our RCF team went into Bosnia and Herzegovina with part of their team to a place near Bjeljina where we visited a Roma village.

Normally when you enter a Roma village, first what you would see are stray dogs, a lot of compacted houses, kids that are playing carefreely … but this village was something totally different. Huge, huge houses, far away from each other, no kids, no dogs. The brother from Romania went to this village last year and this time he tried to find the man that he met last year. We found the man’s brothers that kindly hosted us. Even though he was very hospitable, he was not open to God’s Word. We found out that this village has about 1000 Roma, but the majority of them live and work in other countries. They just come here during the summer. An interesting thing was that this man claimed that his nationality is Romanian, not Roma. He even called himself ‘Rudari’, which we believe is the same as ‘Ludari”, and that is the same group of Roma that is living at Slavonski Brod.

The team from Romania shared with us that they are surprised that the Roma are living separately from Croats. That they have their street in the village or their separate village. In Romania, the Roma are living among the Romanians. They were also sad that Christians are not going to most of these villages and are not working with the Roma who are interested in God’s Word.

We are very thankful to the Lord for Romanian team that boldly and tirelessly worked among the Roma.

We are praying that the Lord in the future would raise up committed workers for his Kingdom who are going to proclaim his Gospel to the Roma. 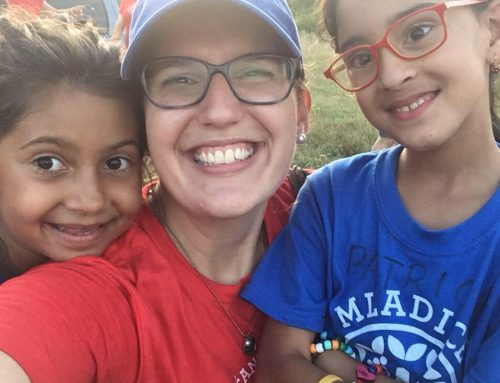